Ranking Every Disney Castle Around The World!

You are here: Home / Disney Tips / Ranking Every Disney Castle Around The World!
101 shares

This is my super helpful ranking of every Disney Castle around the world! Now although you can find some smaller castles sprinkled around the Disney Parks around the world, this list ranks the six main Castles located in the Castle Parks (think Magic Kingdom and Disneylands)!

When ranking the Disney Castles around the world I applied the following factors:

Important Warning! Some of the Disney Castles are currently undergoing some major changes and upgrades! At this time, Hong Kong Disneyland’s Castle is getting a serious upgrade and Magic Kingdom’s Castle is undergoing a (pink) update! This list is subject to change as these big Disney Castle renovations finish up and the beauty of these new Castles around Disney are unveiled. 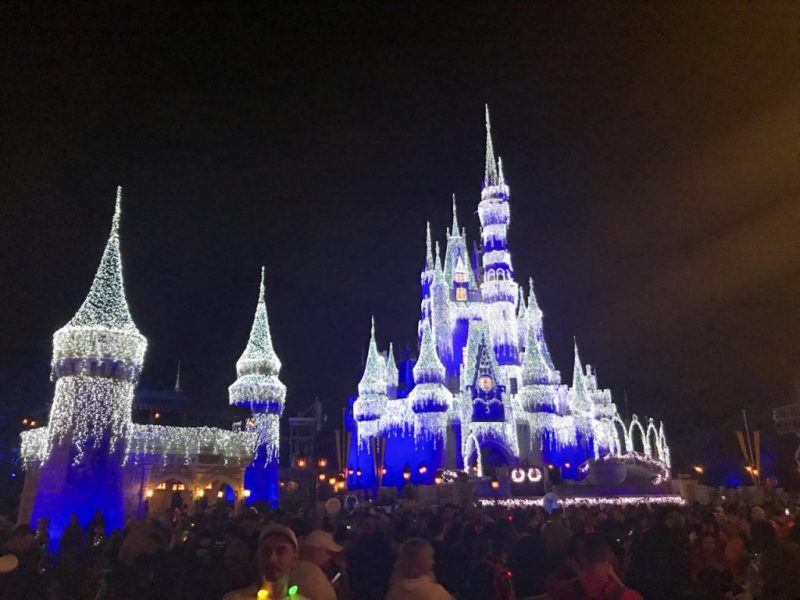 Get a FREE printable 30/60/90 day Disney countdown by joining our private Disney Facebook Group and share your photos and ask for tips and tricks.

Ranking Every Disney Castle Around The World

How Many Disney Castles Are There?

READ NEXT:
How To Easily Get From Paris To Disneyland Paris 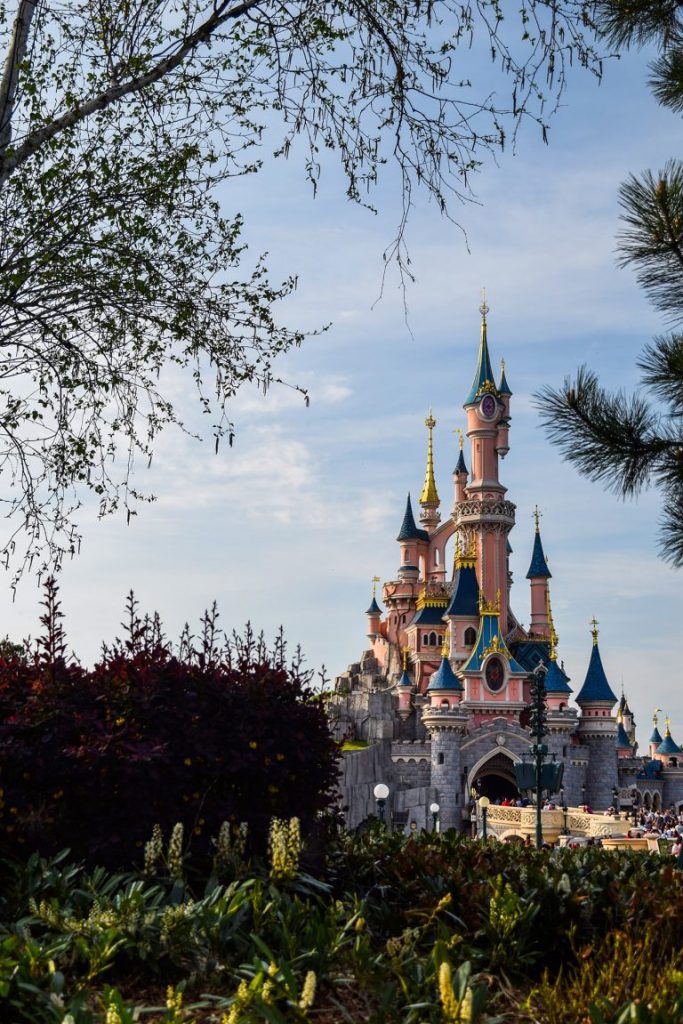 List And Locations Of Disney Castles Around The World

The 6 Disney Castles Around the World: 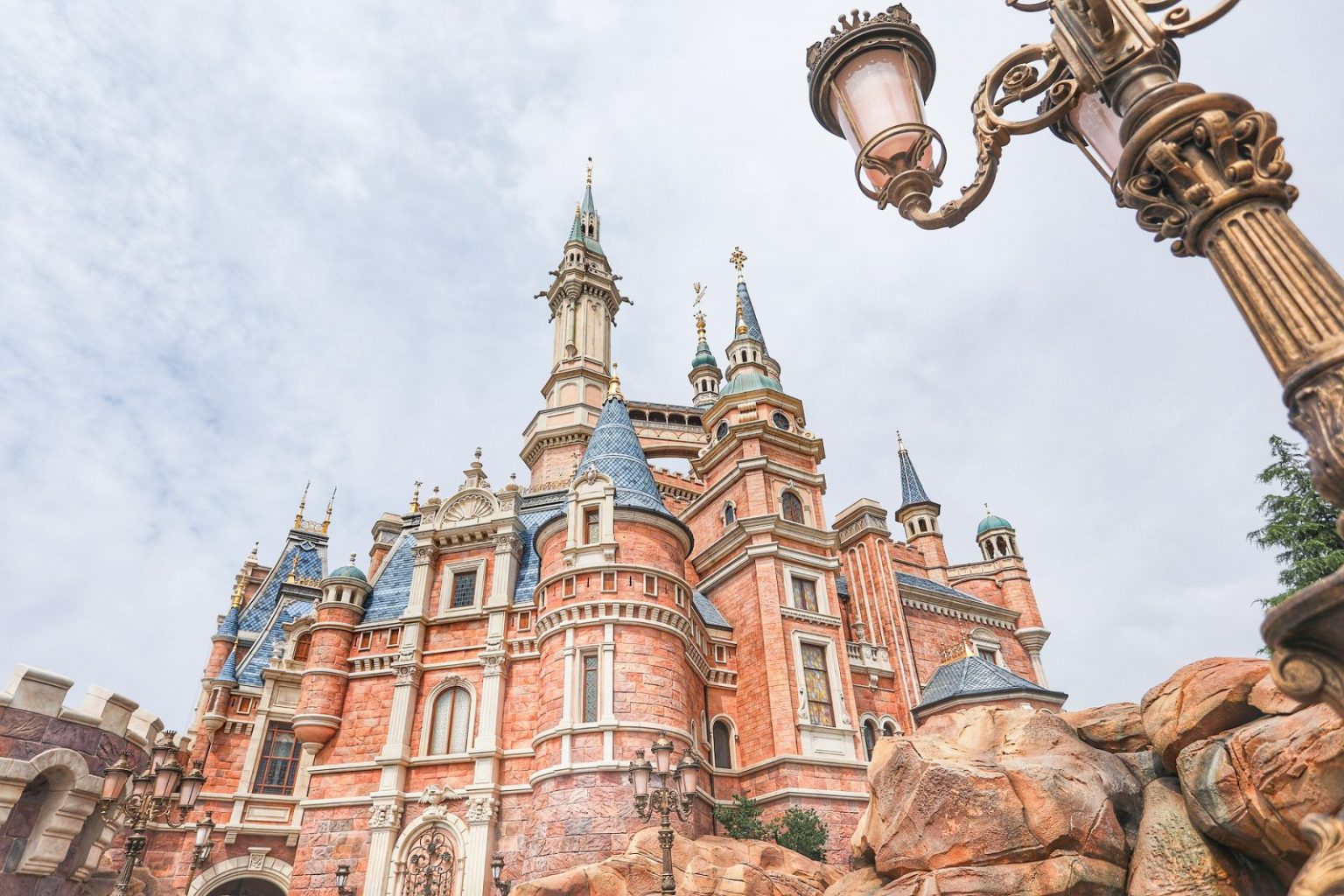 Ranking Every Disney Castle Around the World

Sleeping Beauty’s Castle at Disneyland Hong Kong is very small, especially compared to its backdrop of a massive mountain! Unfortunately, as you approach Sleeping Beauty’s Castle at Disneyland Hong Kong you don’t notice the Castle first, you notice the mountains! The beautiful mountain and natural backdrop, while stunning on its own, detracts from the teeny Castle that appears to be just plopped in front of it.  Rumor has it that this is something that will change after the upgrade! 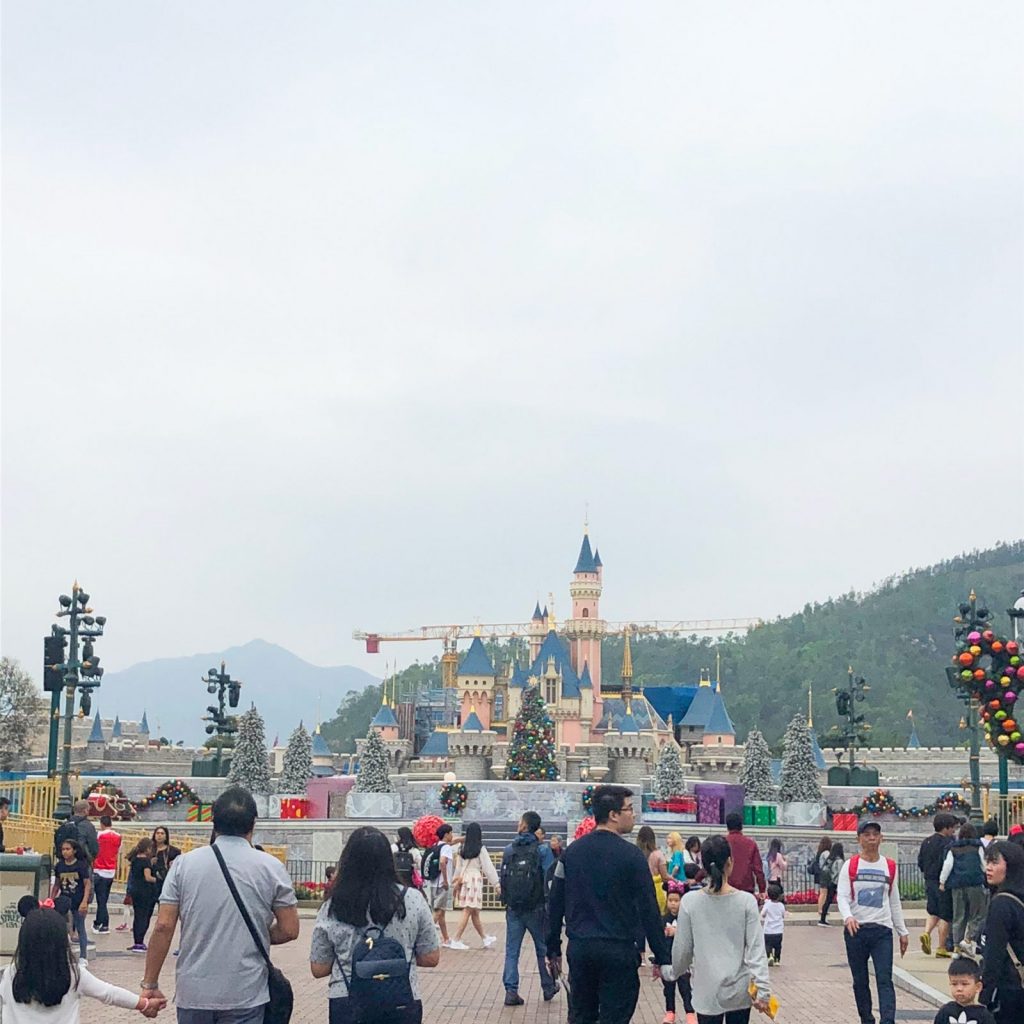 Sleeping Beauty’s Castle at Disneyland Hong Kong can be really sparkly and has some amazement factor, it is still a Castle after all. That said, it is just too small and limited, almost cheap feeling, to take any spot other than 6 on my ranking of every Disney Castle around the world!

It is definitely less fancy than the newer Disney Castles and always feels far less sparkly. Due to its size, there is less of an amazement factor as you enter the park and approach the castle. It is clear you are standing in front of a Disney Castle, but it always feels more kid-like than beautiful and magical.

READ NEXT:
Disneyland vs Disney World: Which Park to Pick?

Given that Disneyland is in the middle of a city and requires a bit more Imagineering to provide a fully immersive feeling, it would be great if this Disney Castle got an upgrade. 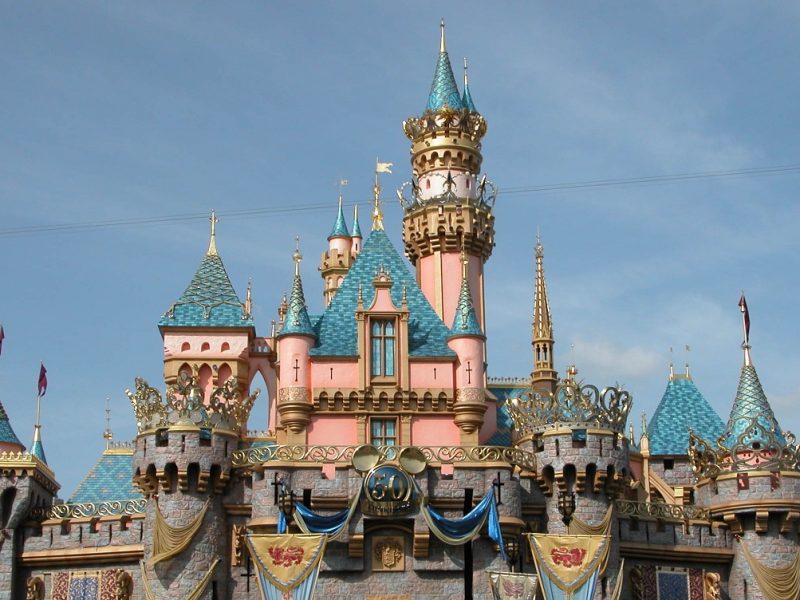 Disneyland California’s Sleeping Beauty’s Castle scores points for guest interaction as it does have a walk through attraction open for all guests with no extra charge.

READ NEXT:
21 Best (And Worst!) Disneyland Restaurants You Won't Want To Miss

Disneyland Shanghai’s Enchanted Storybook Castle scores really high when it comes to guest interaction as it is home to a restaurant and a gift shop! This Disney Castle is also very elegant, and sparkly, more than child-like, which is definitely my preference when it comes to Disney Castles. 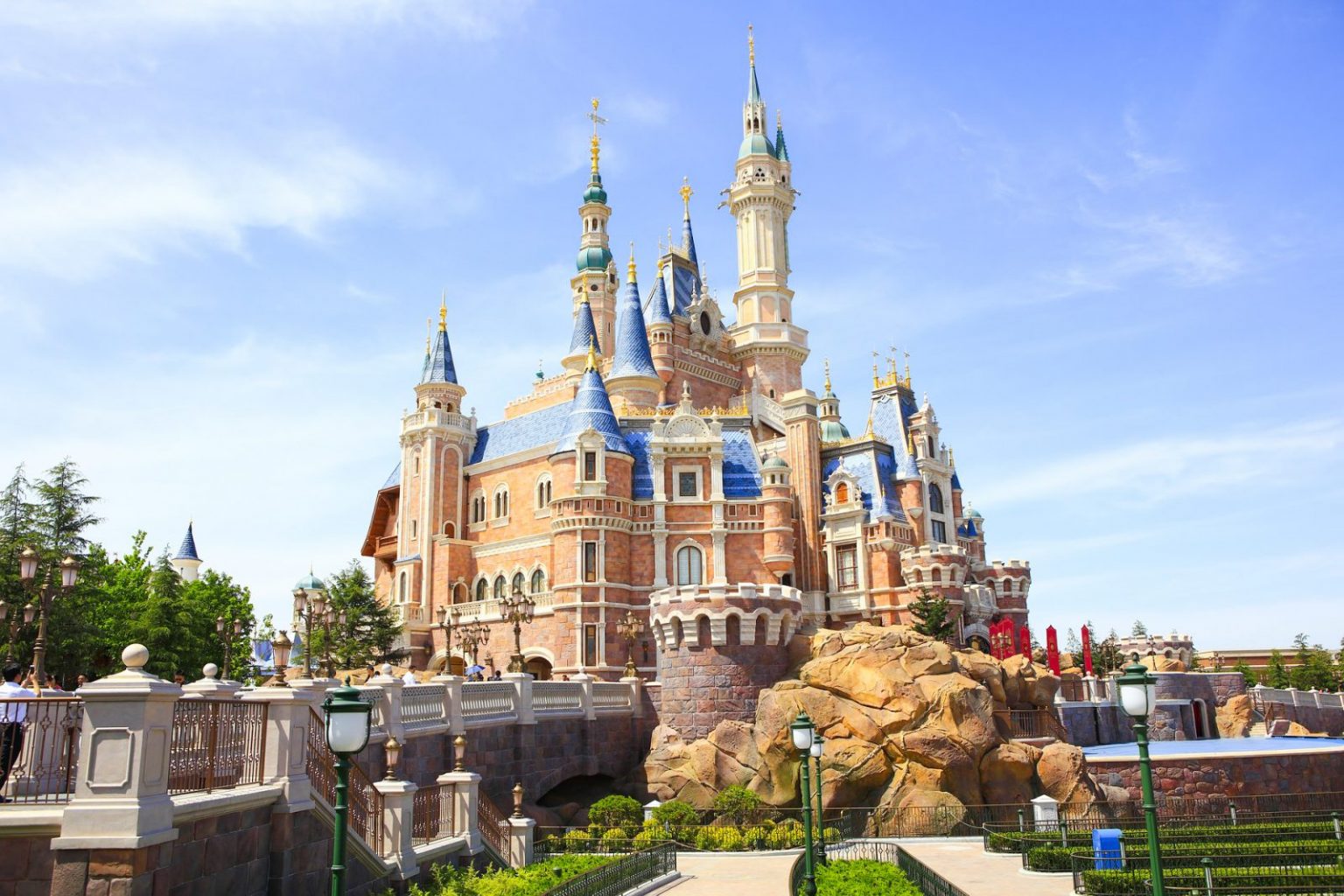 Magic Kingdom, located at Walt Disney World Resort, is home to the original Cinderella’s Castle! This Disney Castle is massive, beautiful, and iconic. The moment you enter Magic Kingdom you will see this sparkly gem immediately and as you walk down Main Street, the size becomes even more impressive.

As Cinderella’s Castle at Magic Kingdom is in the dead center of the park, you also get so walk by and around her all day as you navigate through the various lands.

READ NEXT:
10 Best Magic Kingdom Rides And Attractions Not To Miss

At this time, Cinderella’s Castle at Magic Kingdom is undergoing an update and it appears this Disney Castle is about to become a whole lot more pink. I am not a fan of the bubble gum colors on Disney Castles and prefer the white, blue, silver, and sparkle look so we will see if this update causes a change in my rankings. Only time will tell! 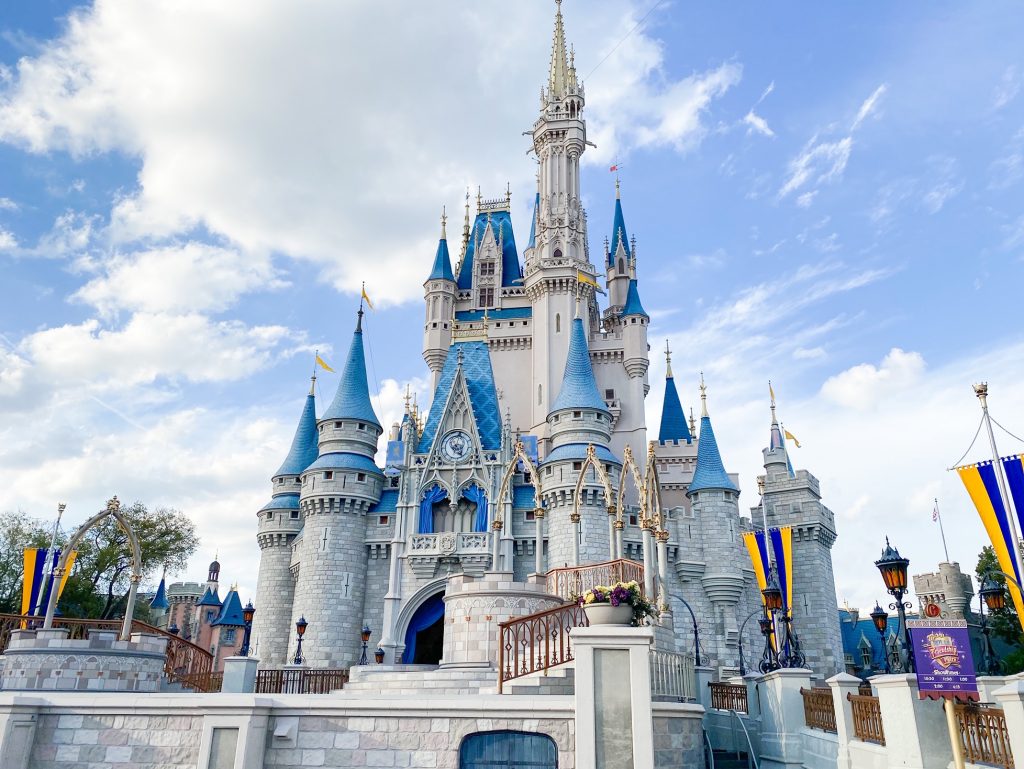 Cinderella’s Castle at Magic Kingdom was my home Disney Castle as a child. All I ever wanted was to go inside and explore and while I am glad Disney has added to the interior from when I was growing up, it is not great. Unfortunately, the only guest interactive activities inside this Disney Castle will cost you a lot more money on top of your park ticket.

Cinderella’s Castle is home to Cinderella’s Royal Table (expensive), the Bibbidi Bobbidi Boutique (super expensive), and the Cinderella Castle Suite (the most exclusive Disney space at any Disney resort in the world)!

I don’t view Cinderella’s Castle as being very accessible to the average guest so it scores really low for me when it comes to guest interaction. That said, nothing can take away from home beautiful and breathtaking this Disney Castle is. There is really nothing more exciting than taking your family photo on Main Street with this beauty behind you! Maybe you can even catch a photo while Tinkerbell is flying “over” it! 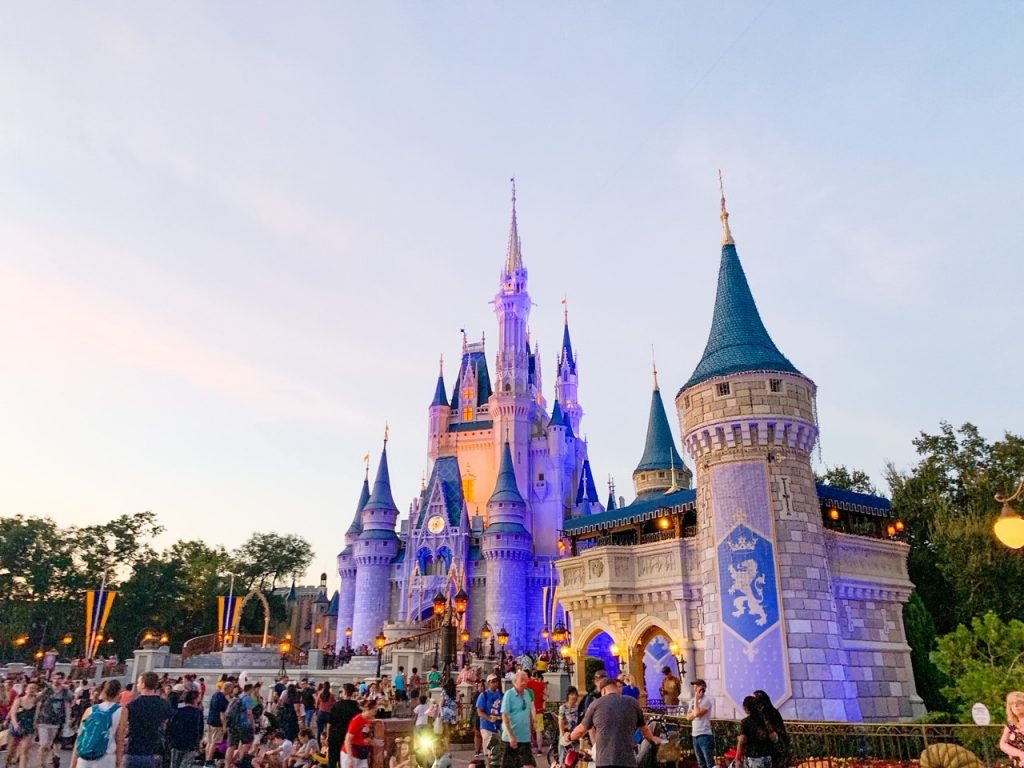 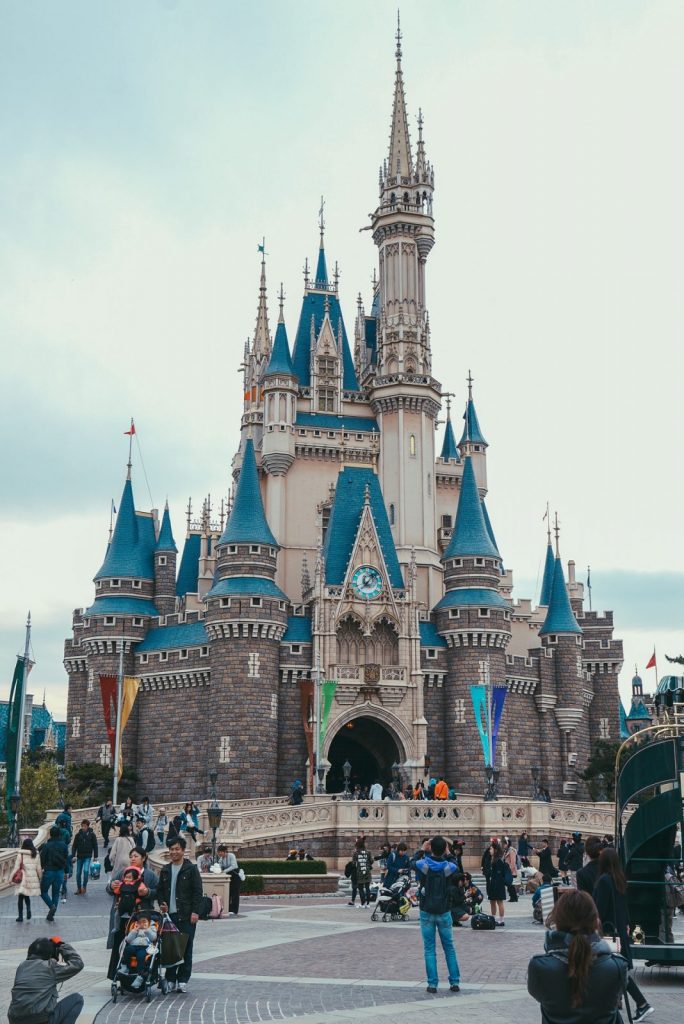 Tokyo Disneyland also gets snow so you can catch a glimpse of this beauty with a fresh fluffy coat and I think Tokyo Disneyland does a top notch job with the lights, sparkle, and decor all year round!

READ NEXT:
Ranking Every Disney Park Around The World!

One negative factor for Cinderella’s Castle located at Tokyo Disneyland is that is one of the hardest Disney Castles to see as you enter the park and approach. This is due to the fact that Main Street at Tokyo Disneyland is a covered area. This means your view outside the covered Main Street area is limited until you pop out from under it. Given the weather in Tokyo, I am grateful for the covered Main Street, but it does take away that WOW feeling as you enter the park because this Disney Castle is a bit hidden. 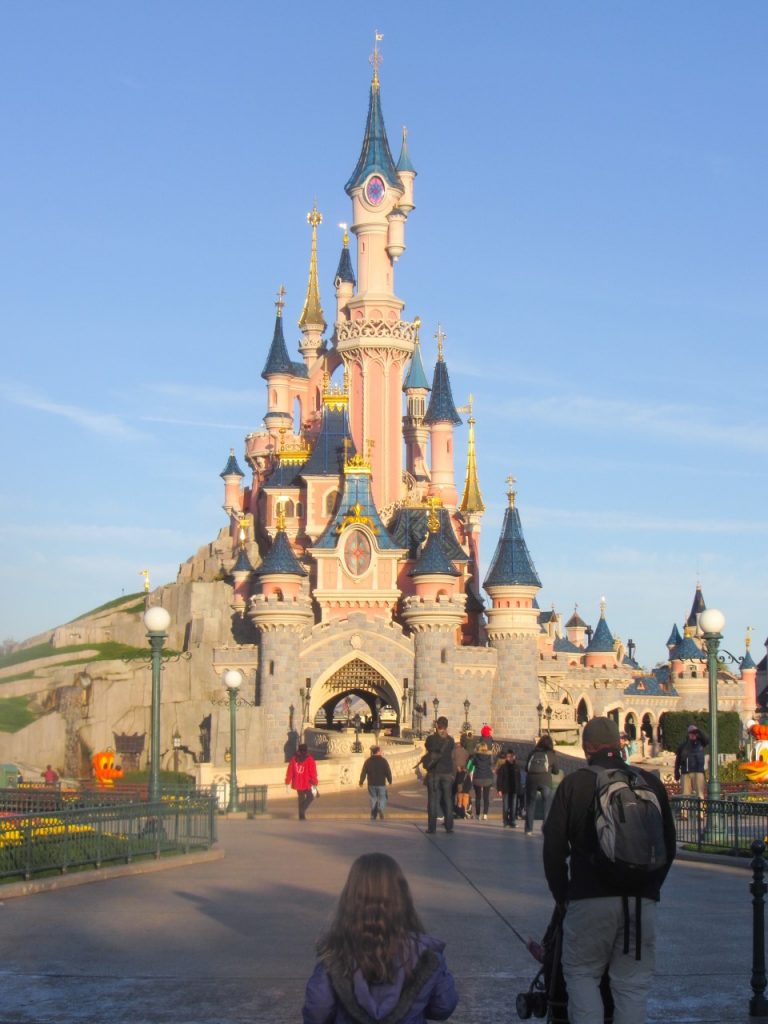 Le Chateau is a top attraction when visiting Disneyland Paris. For obvious reasons, La Taniere du Dragon should be your first stop when you arrive at Disneyland Paris as it’s the perfect way to kick off your magical day. Although Le Chateau is similar in size to Cinderella’s Castle, it has far better guest interaction options and feels more integrated into the park.

One great thing about Le Chateau at Disneyland Paris is that this is one of the Disney Parks around the world where it can snow which means you can see this beauty covered in a fresh snowfall if you time your visit right! Disneyland Paris also does a great job with the lights making this beautiful Disney Castle even more awe-inspiring. 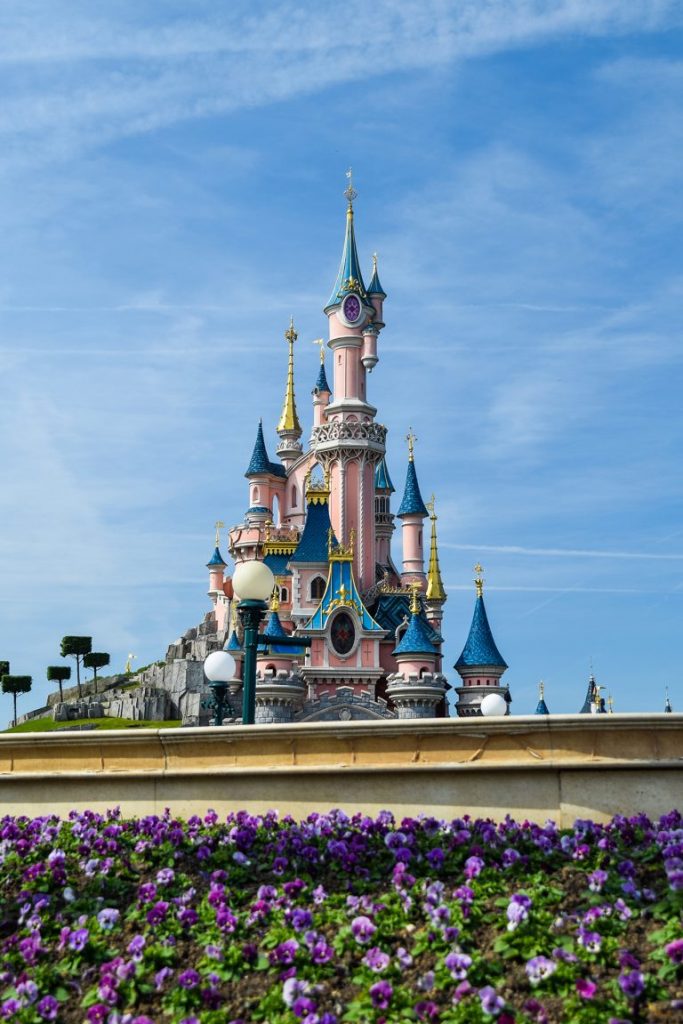 Inside La Chateau at Disneyland Paris you can find the Sleeping Beauty Display and because every side of Le Chateau is unique, you can take jaw dropping photographs all around it!

Be sure to check out my guide for the best views of the Disneyland Paris Castle and don’t miss out on a great photo opportunity.

READ NEXT:
8 Best Views Of The Disneyland Paris Castle

How To Use The Disney Park Pass Reservation System
Next Post: 20 Festive Ways to Celebrate Christmas in Orlando